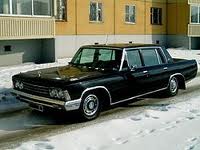 After Bond has dispatched Obanno and his bodyguard in a brutal hand-to-hand fight, Rene Mathis is tasked with disposing of the bodies. Rather than just dumping them in a shallow grave, Mathis cunningly arranges for them to be placed in the boot of a Russian ZiL-117 that’s sitting in the hotel car park.
The ZiL-117 was in production from 1972-1985 and featured a 7-litre V8 engine that powered its considerable mass to a top speed of 125mph, making it the fastest Soviet-made passenger car of the 1970s. It was often used as an escort car for Politburo members who did not qualify for the larger ZiL-114.
Stunning die-cast model; Highly detailed replica; Scale 1/43; perspex display box with label.
**********  SOLD  **********